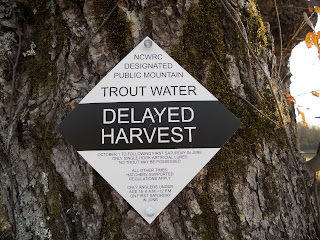 I was up on the river a few days ago and had yet another wonderful day. The weather was actually pretty warm and the sun was out. I didn't expect such a banner day since it wasn't overcast and certainly didn't expect what I was about to catch. I had landed several trout that day and was just moving along the overhangs drifting small nymphs when out of no where a huge brown slammed my fly. This fish was 24 inches and all of five to five and a half pounds. I'm pretty sure I'll be looked at like I'm crazy for even attempting to film this fish but that's what I did. I don't want to take away from the video that I risked so much to shoot so here it is.

Needless to say it was a real caper on what was a great day on the water. I had the strangest thing happen to me as well. I was standing there casting away and all of the sudden something hit my boot. I looked down and to my amazement there was a brook trout just resting between my feet. Now I'm a very still person and sometimes don't move my feet for hours while fishing. So with that said I had a fishing buddy for about forty five minutes which I thought was pretty cool. Check out the photo I took of my good friend. I talked to several guys on the water that day and even handed out a few pointers here and there since I apparently had the magic touch for the day. I cant wait to get back up on the water and try and beat my own record. 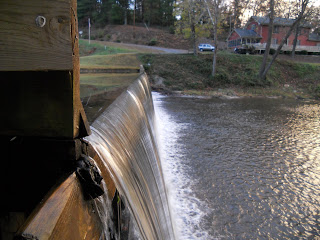 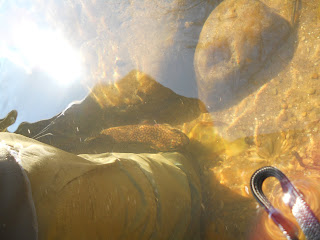 See you on the trail,
Lance
Posted by Lance Milks at 12:21 PM